CPAP is an acronym for “continuous positive airway pressure”. A small amount of overpressure is produced in the airways. This pressure is intended to prevent the lungs from collapsing, thus allowing patients to breathe. It is used for non-invasive ventilation and is used in pediatrics, especially for newborns with neonatal respiratory distress syndrome. 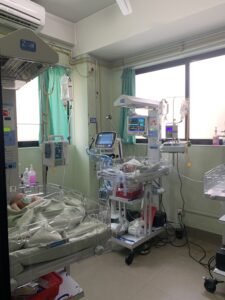 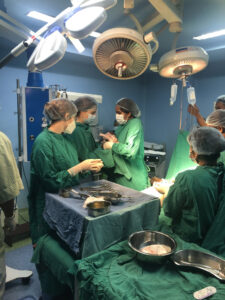 We, Natalie Kaiser and Anna Karoline Seiffert, visited Nepal in March 2022 and completed clinical electives as part of our medical studies. We were supported by the NGO Nepalmed e.V., which, among other things, organized a trainee position in the children’s ward and the surgical ward at Kirtipur Hospital.

One case in particular stuck in my mind: A newborn baby had to be resuscitated and intubated shortly after birth. After a few days of invasive ventilation in the NICU, the baby’s condition fortunately improved and he could be extubated. Ventilation with a CPAP machine was now indicated. Unfortunately, such a device for infants and children is not currently available at the hospital.

When doctors do not have essential equipment for the adequate care of their patients, necessity is the mother of invention. So, without further ado, they assembled a respirator consisting of hoses, oxygen supply and a plastic bottle filled with water, thus helping the little boy to breathe with less effort. This worked quite well and the patient could be discharged a little later in good general condition, but the chances of survival could be greatly improved with a proper CPAP ventilator.

Already during our time in Nepal we thought about starting a donation campaign to enable the hospital to buy such a device. So we approached Nepalmed again with this matter of the heart and asked for support for this project, which was immediately granted.

With the head physician of pediatrics, Dr. Deepak Rajbhandari, we have a contact person on site who knows exactly what is needed.

He provided a listing of the equipment and listed the costs.

From this, the bubble CPAP machine including water evaporator, wheeled cart, mechanical gas mixer and standard accessories (e.g. air filters and tubing) could be financed. The order would be placed on site, so nursing and medical staff would receive additional equipment instruction.

With this donation we could help the doctors in Kirtipur to provide the best possible care for the children.

This would make us, the hospital staff and Nepalmed insanely happy, but most of all, of course, the parents for whose children CPAP ventilation would be life-saving.

We thank you for Your support! 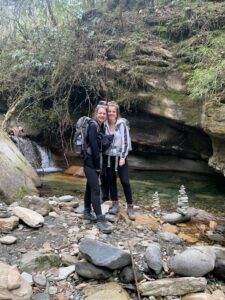